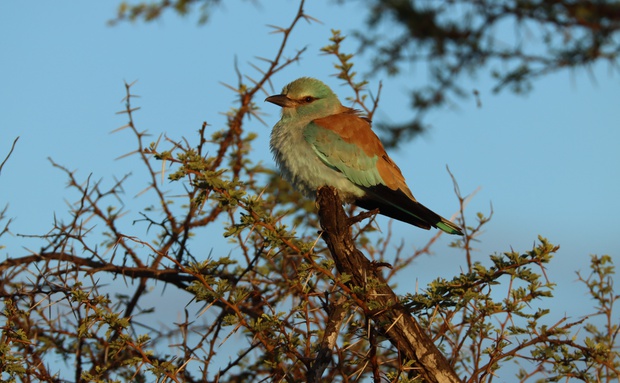 Welcome back to yet another exciting update on our adventures here in the Klaserie Private Nature Reserve. I will be covering all the thrilling sightings that happened during May.

We are heading into winter. The mornings are chilly, which means it is that time of year where we get out the hot water bottles, blankets, gloves and a nice warm tea, coffee, or hot chocolate. The bush luscious green is slowly fading to a rustier brown and yellow winter colours. The days are pleasant as we still have average temperatures in the low to mid 20ᵒC.

All images in this article were taken by Stefan Breuer, owner.

We were extremely lucky to come across a rare sighting. 4 Leopards and a clan of hyenas. Manzi and her 2 cubs were feeding on an impala carcass which was hoisted up in a tree. This is very common for leopards to do as this makes their food secure and out of reach from other predators. But not necessarily out of reach from other leopards. Which was the case today. A big male leopard called the Pale Male stumbled across Manzi and her cubs in the tree and attempted to steal their impala carcass from them. Manzi knows the risk about getting into a confrontation with a larger male leopard. She could get injured which would then affect her and her young cub’s future survival.

All this commotion with the 4 leopards in the tree then attracted a couple of hyenas.  Suddenly the impala carcass fell out the tree and created an opportunity for the hyenas to snatch it up immediately. This then led to a battle amongst the leopards and hyenas. The hyenas even started fighting amongst each other as the carcass became less and smaller. The leopards were extremely careful approaching the hyenas and eventually were able to retrieve small scraps of meat for themselves. This was truly a once in a lifetime experience. 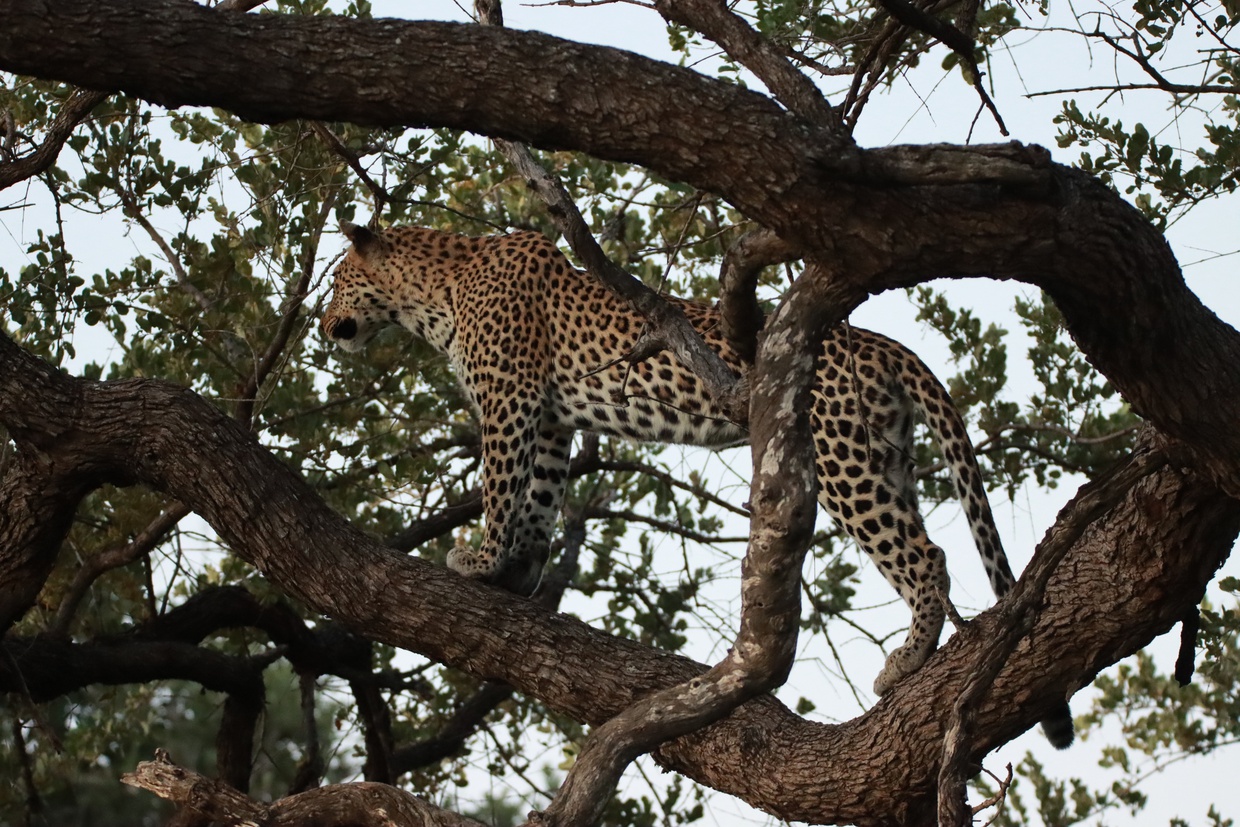 Our guests had quite the welcoming. On their way to the lodge from the airport they stumbled upon a heated fight amongst male and female lions around a large giraffe carcass, which appeared to have died naturally. But after a while the males did claim the giraffe for themselves, and the females were left standing at a distance waiting for their opportunity to feed. Our guests arrived at the lodge with quite the adrenalin pumping explain the crazy sighting they just had. Something they really loved was the scary noises the lions made while fighting. They quickly realised these are not cute little cats that just lazy around. These are fierce African lions. The guests were very excited for the rest of their stay. What a great start to a safari holiday. 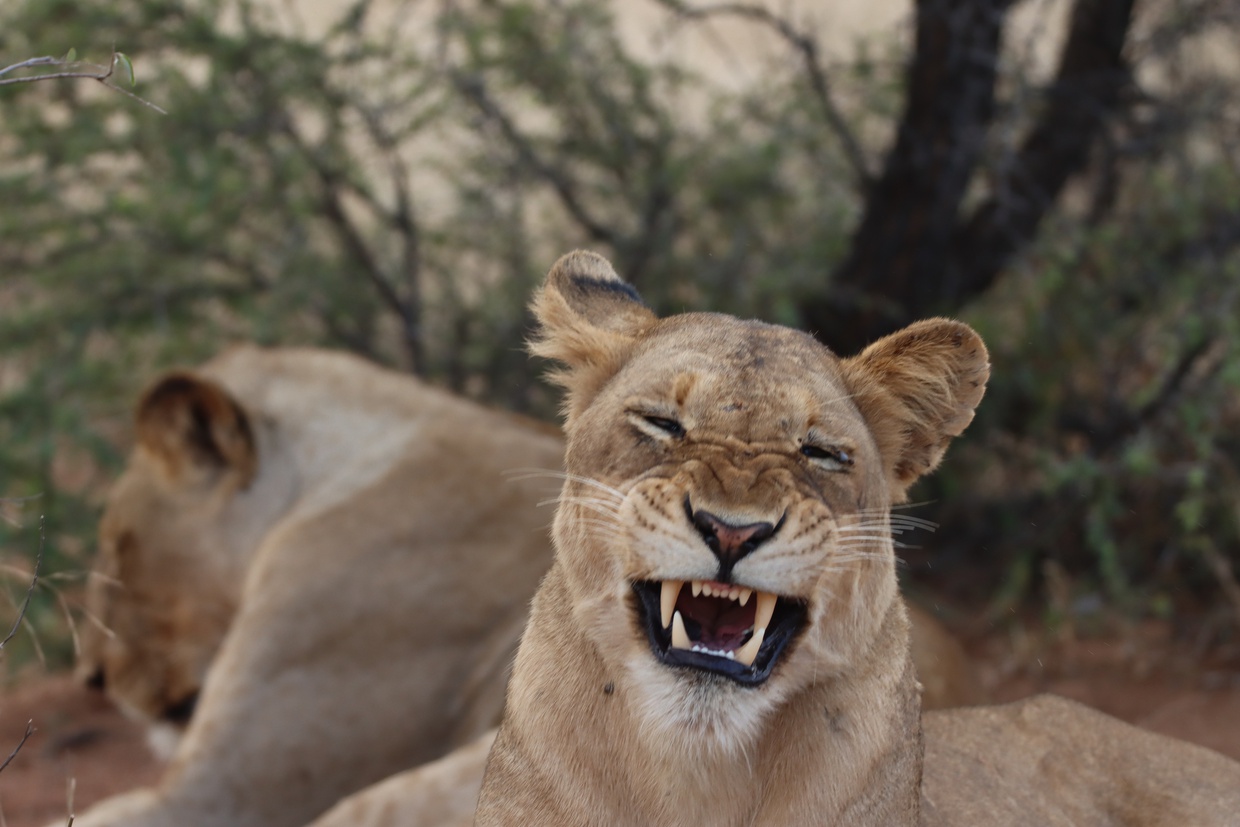 The bush has been flourishing due to some late rains we have been blessed with. This provides as a nice feeding source for the large elephant herds as they need to eat a lot for their big body size. They have also been hanging around the Klaserie river which is a nice water source. This gave us plenty of opportunities to spend some time with them while they were feeding, drinking, and splashing around. We even had some elephants come by the lodge to join the guests for dinner at the boma. It was a beautiful full moon night so you could see the elephants so clearly.  The silence of the night also just emphasized the sounds of them walking through the bushes and eating on the branches. Not bad company to have around. 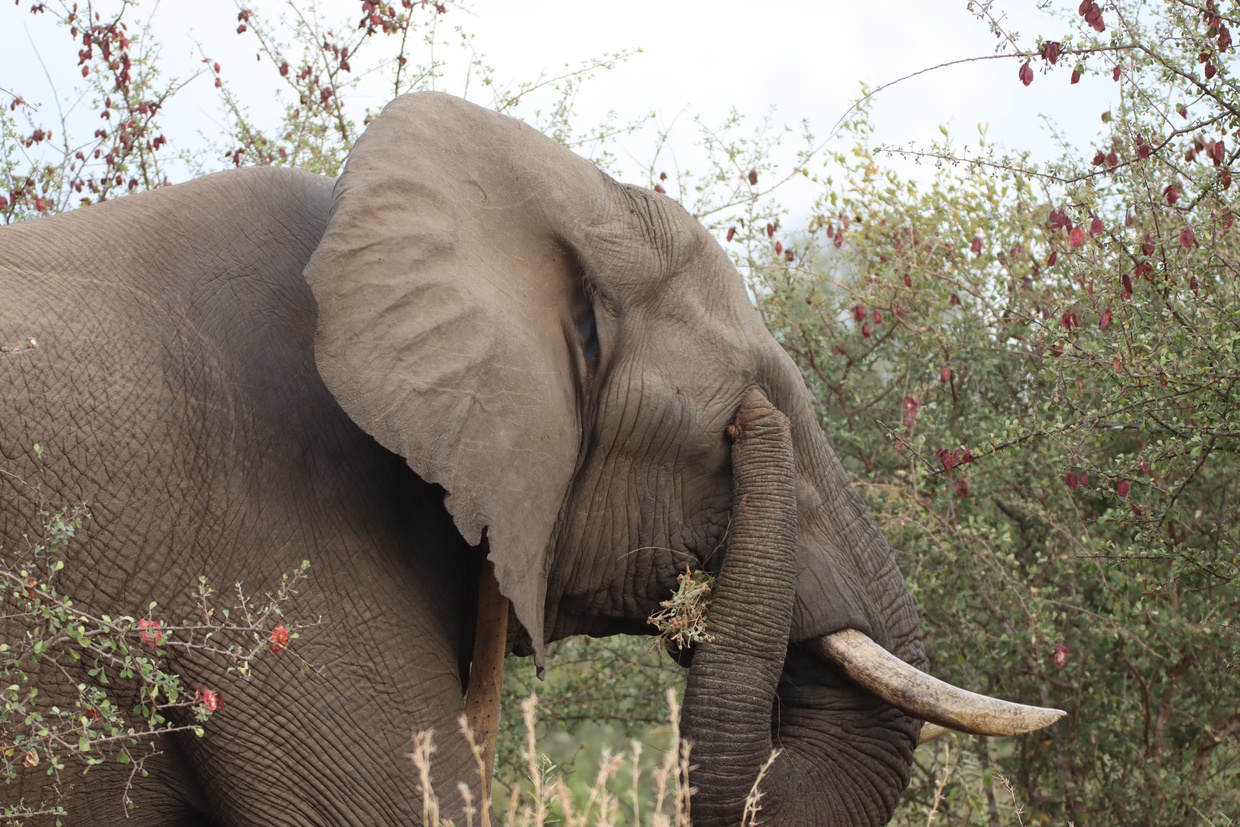 The one morning we found a large pack of wild dogs trying to take down a blue wildebeest calf. This hunt required great focus and patience as they first needed to get past the protective herd of adult wildebeest to get to the calf in the centre of the group. At first, they tried to separate some of the adults from the calf, but this took a while and then the next moment some hyenas showed up. This then caused a huge commotion amongst the hyenas and wild dogs. After a while the wild dogs gave up on their hunt and scurried off. Better luck next time. 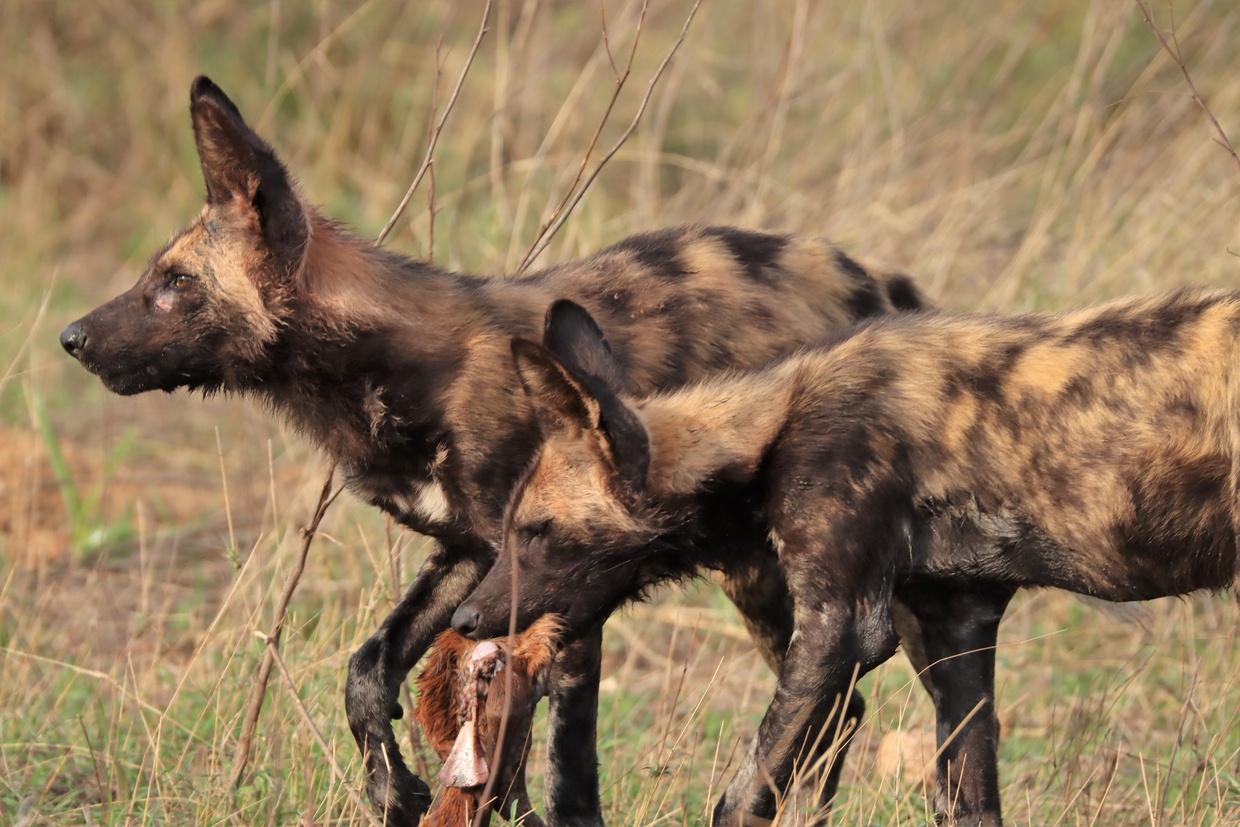 Small groups of buffaloes have become quite common around the Klaserie river as it provides great grazing opportunities and a constant source of water throughout most of the year. Especially moving into the winter where food starts to become less and a bit harder to come by. 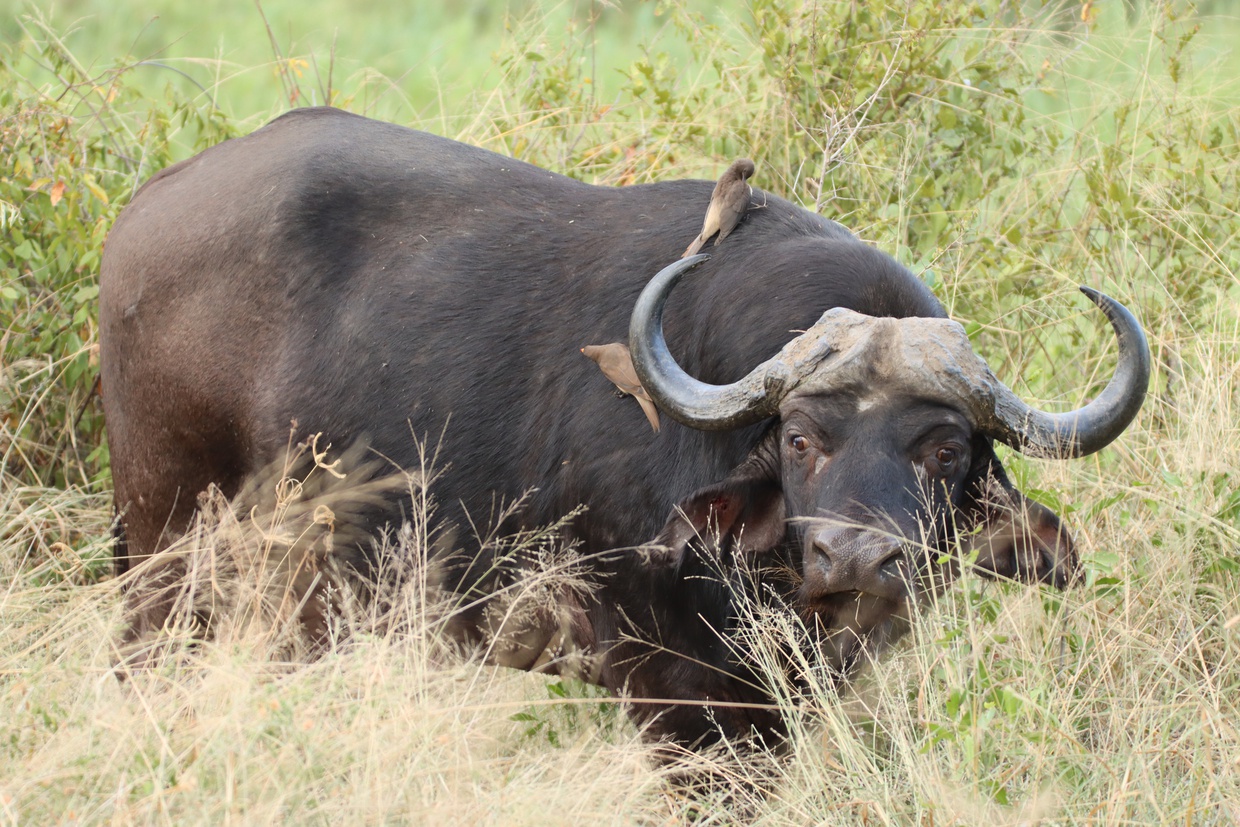