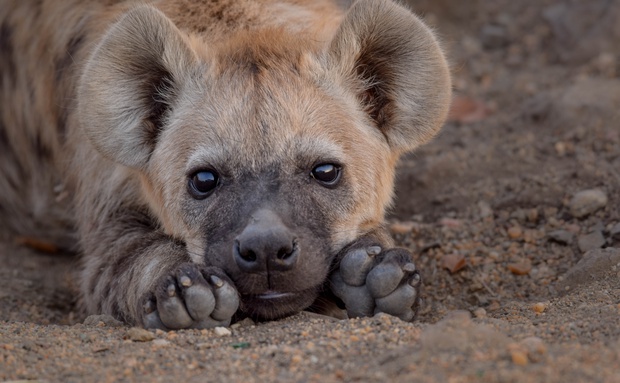 Welcome back to another exciting update on our adventures here in the Klaserie Private Nature Reserve. I will be covering all the thrilling sightings that happened during September 2021.

All images in this article were taken by Adrian van Zyl, Ruan Ferreira & Cherié Bredenkamp, our Managers.

We just moved out of winter, days are getting longer and warmer even though the evenings are still nice and cool, animal paths are very visible, they look like highways all leading to water sources. The sunrise is beyond spectacular, with all the browns and yellows and the odd tree that is starting to push fresh leaves and flowers here and there. The days are pleasant to warm, with average temperatures now reaching the low 30’s ᵒC. 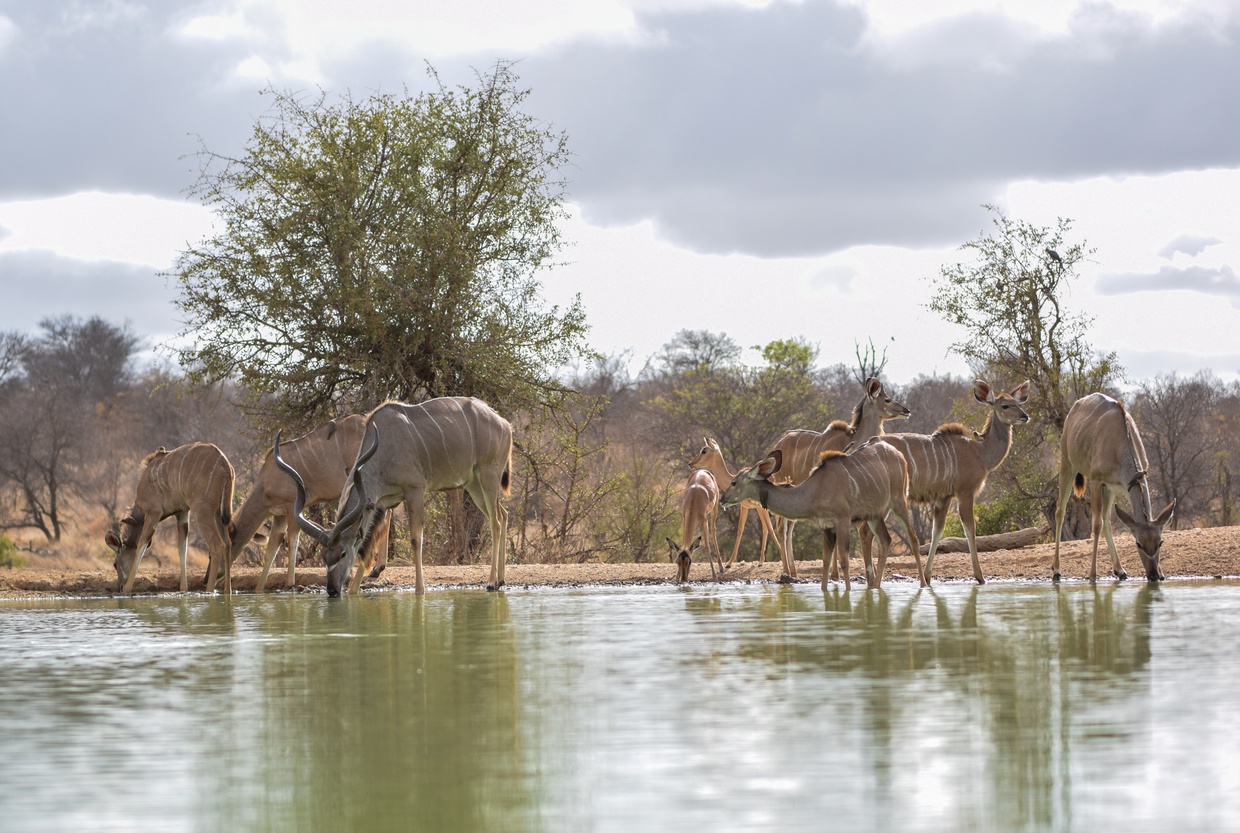 Game Drives have been really great, we have had exceptional sightings with the bush that is so thinned out, it really makes game viewing easier. Don’t be fooled though, the animals still give us a proper run around to find them. The nicest thing in the mornings is to start that engine - drive out to a hotspot or an area where you possibly heard sounds throughout the night and start reading the newspaper (tracks on the road). There will be various different articles to read, from nocturnal animal tracks, to nocturnal bird tracks and your everyday general game tracks. So, choose your article and start building your ‘’puzzle” to figure out which tracks are the freshest and then start your search.

I usually start my puzzle from my house to the lodge as we have quite a bit of animal traffic through camp at night (leopard, hyena). I always inform our trackers first thing and that is how our morning conversations start (tracks through camp, what animal it was and also what we heard throughout the night) while preparing morning tea and coffee for guests.

Leopard sightings has been phenomenal, moving through the camp, around the property and even making kills close to our houses. The female leopard known as Manzi has been very active around the lodge and some of our guests has been lucky enough to see her with her 2 cubs. The 2 large males are still around, the darker of the 2 males has walked past our boma twice giving territorial calls whilst sitting around the fire and dining with the guests, that always gets the heart rate going. One of the young males has also been seen a few times, moving between the two pans (malembeni and windmill pan) looking for potential meals moving to and between the two water sources. 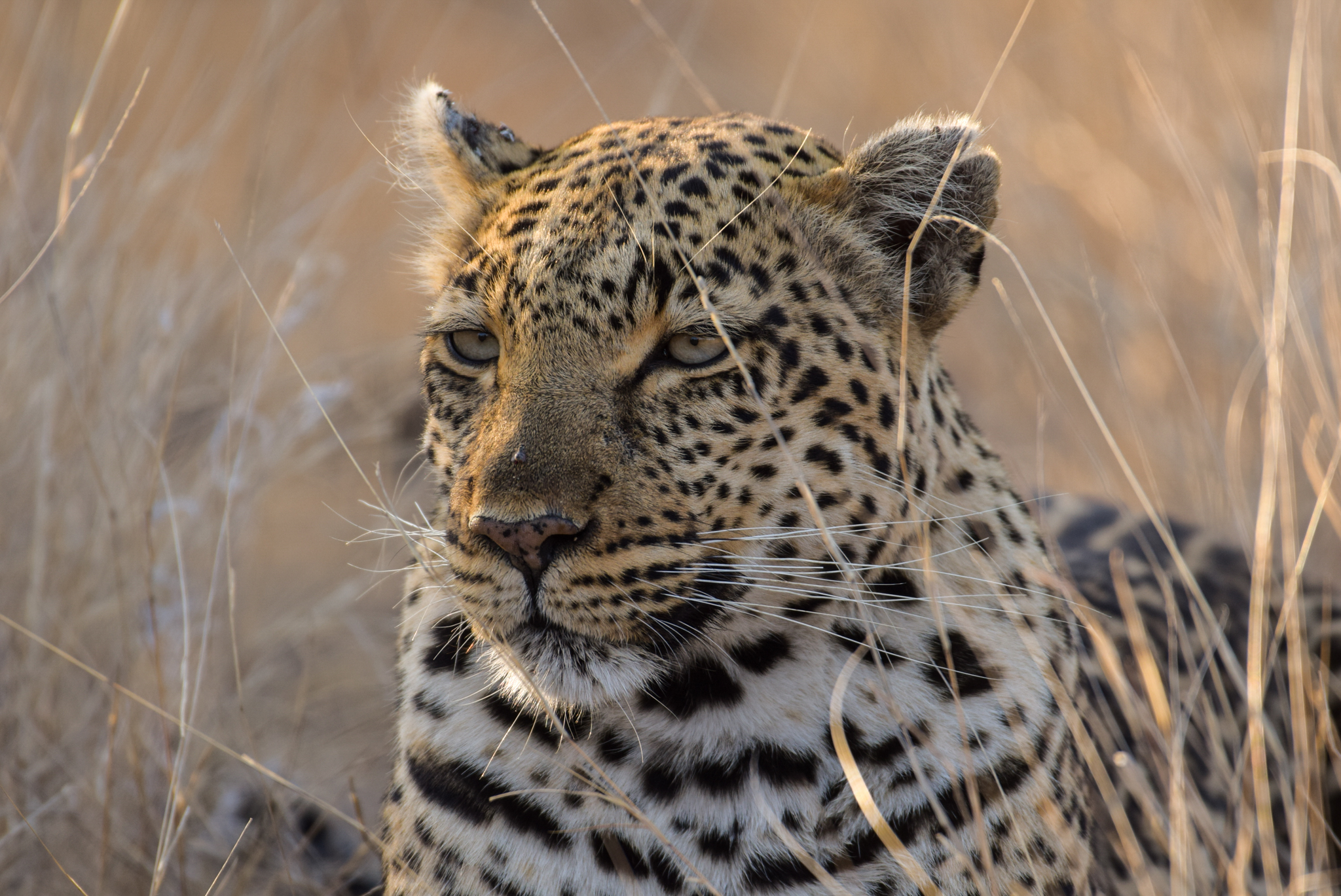 We have been blessed with lion sightings over the last month and very close to the lodge. We had them just north of the lodge for three days straight, first on a Zebra kill and then an impala. We have mentioned the dynamic changes, regarding males being pushed out in previous reports. I was sitting thinking the other day, what about the females, even amongst them there will be meal time competition and the stress of raising the current and next generation. Your average pride of lions is usually 8-12 individuals, which is way easier to provide for in terms of meals, so if there is too much competition within the pride amongst the females, then even some of them can break away. Very interesting times ahead too watch the dynamics as a whole and not just amongst the males.

The pride itself is doing very well, providing frequent meals and good-sized meals like buffalo and giraffe. 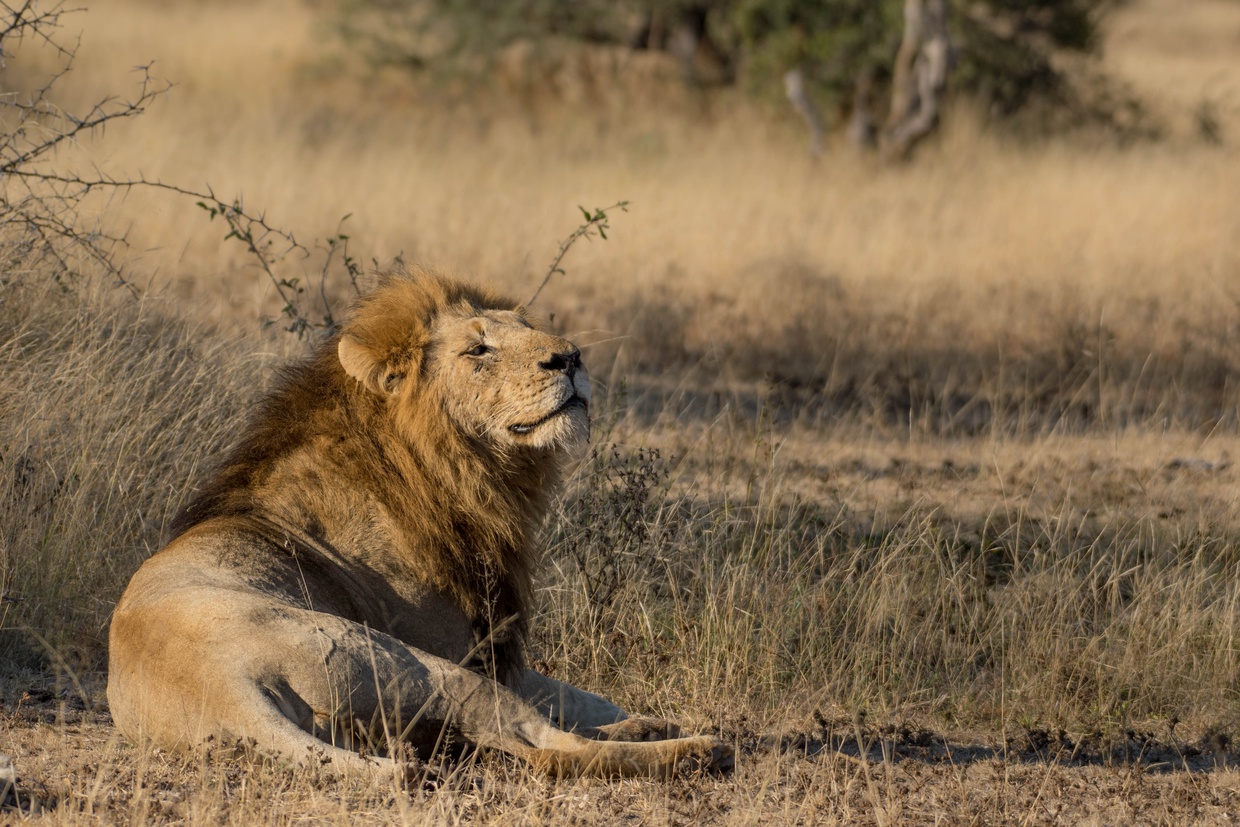 Our big pachyderms have been all over, like mentioned in the beginning the very prominent paths leading to water sources, they are mostly responsible for as they are water dependant animals and it also makes it easy for other animals to use. It has been very interesting to sit around the fire in the evenings and listen to the elephants’ rumble, especially when two different herds meet each other down at the lodge pan.

We noticed about 5 different herds moving through the property, and every single herd had a few babies with them. With the lack of good nutritious vegetation, the poor trees have taken a beating again, and if you look at the topography of Makumu with all its rolling hills, it means lots of Knob thorns, elephants love stripping and eating the bark and to push them over for their roots. That again will influence the growth of trees and the tree can even die. Lots of vultures and some eagles use this specific tree for nesting, it is amazing how one thing influences the next, all part of our big ecosystem. 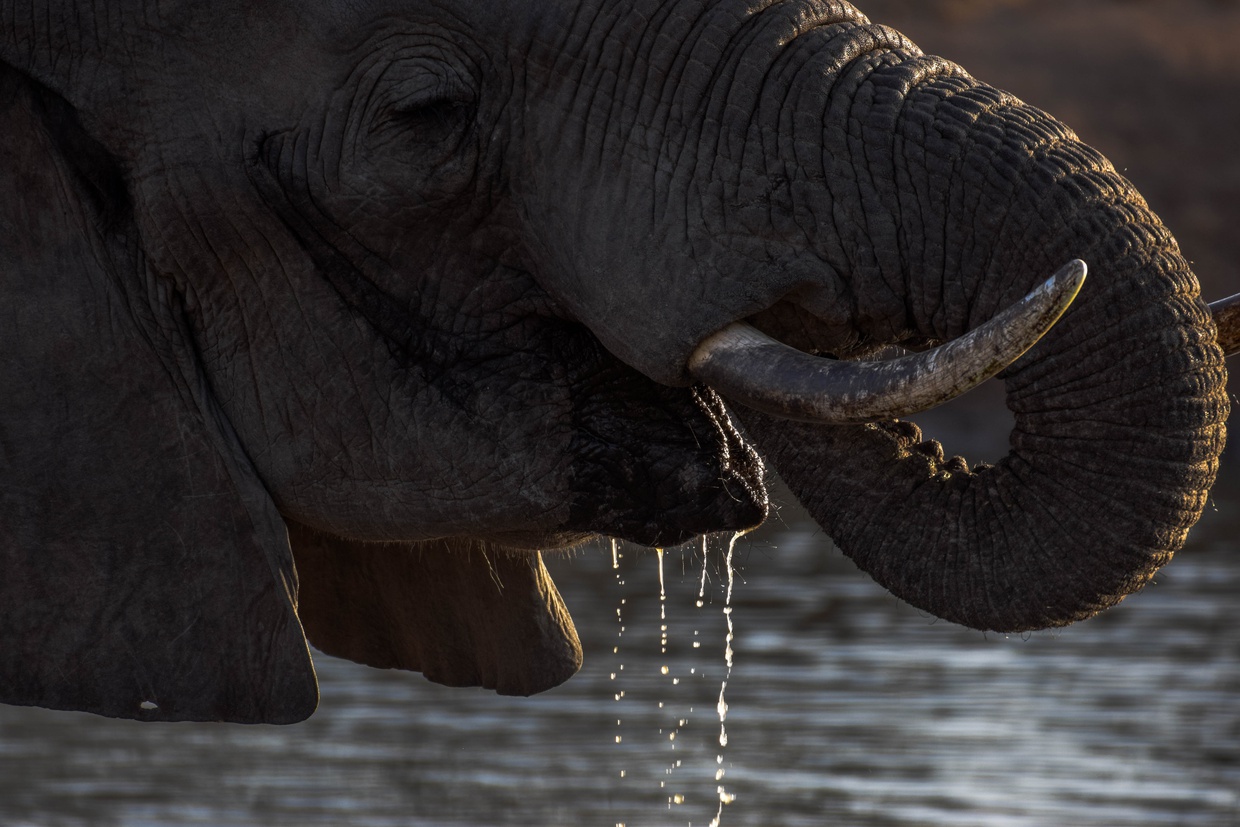 Buffalo herds have been non-existent and even lone buffalos have been difficult to spot, the once that we have seen has been in the river reed thickets, luckily the river banks are nicely elevated, making it a little easier to see these animals. It can also be because of the lion pride that has been so active around the property, that the buffalo have pushed further down river. As the lions move out the area and the water pools dry up the buffalo will be forced to move back to the pools to cool down. 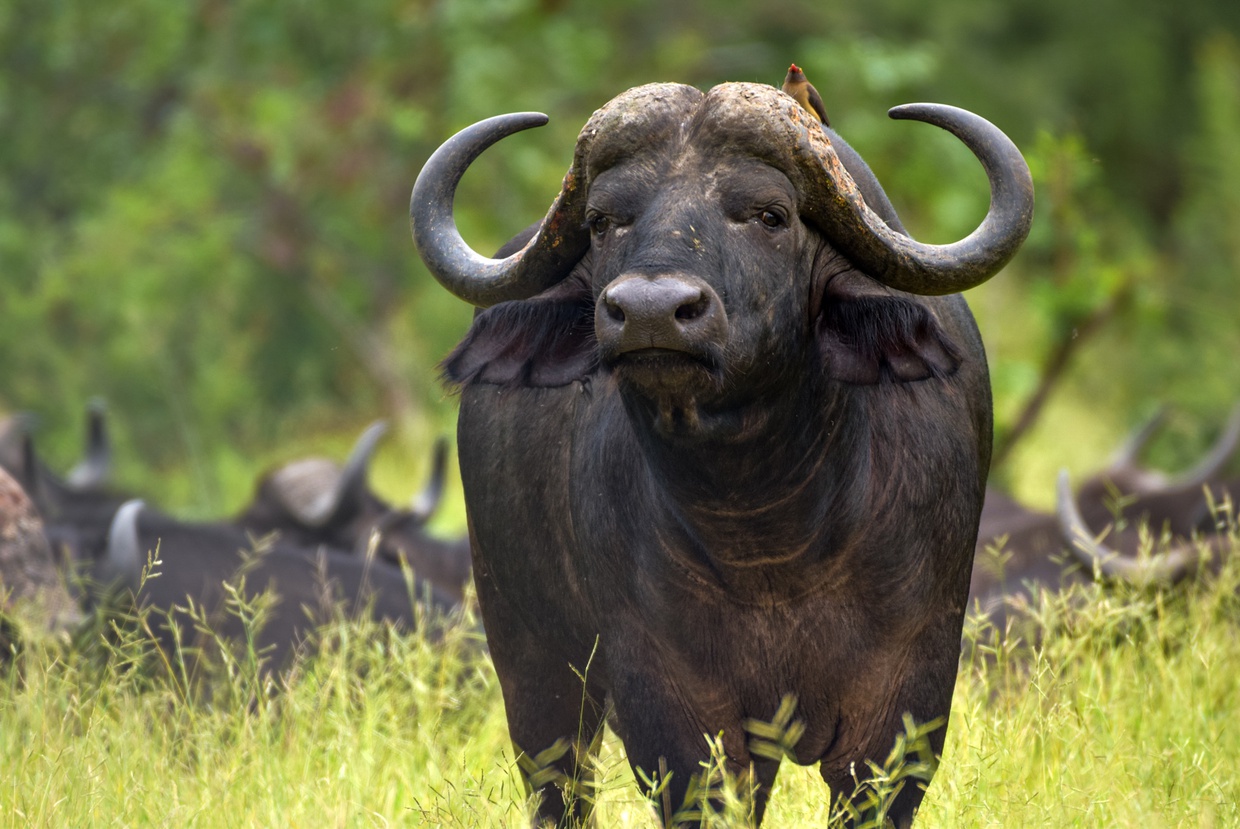 Thank you for following us and allowing us to share our office stories with you. Stay tuned each month for a new wildlife update.